It’s the first of June.  It’s a pivotal day every year, in at least three ways.

First, it’s the first day of meteorological summer. Glorious summer, halcyon season, all the way to the equinox in September and the start of astronomical fall.

Second, it’s my Mom’s birthday, and so her parents named her June Marie Deutsch.  When she got married, she shmussed the two together into “Junemarie” and took “Junemarie Deutsch Zinnen” as her official name.  My Mom was unconventional in other ways—for example, she was a fan of both the Sox and the Cubs—but her bending of nomenclature is a good start.

Third, it’s the day I get to quote James Russell Lowell:  ‘And what is so rare as a day in June?  Then, if ever, come perfect days.’  Today proved Lowell’s point.

In the coming 30 days the corn will grow from green wisps to chest high on its way to the elephant’s eye, the blue-green oats will head out, the alfalfa will be hayed (probably twice, if one cutting is today), the tomatoes will kick into high gear and run up the stakes and break out of their cages, the orange daylilies will riot every day and curl away in curfew every night, and the weeds will run rampant through garden plots.

The summer solstice is but three weeks away, as is our longest day.

June 1 is also my anniversary of starting my job at the Biotech Center in 1991, and thus today starts my 30th year here.  My 29th year was perking along pretty well til March 11, and it’s gotten only more intriguing since.  It’s been 81 days to try one’s fiber and to test one’s mettle.  Given the events of today, I make no predictions for where any of us will be a year hence.  This morning I was reading about the Posse Comitatus Act of 1878 and by this evening I was hearing about the Insurrection Act of 1807.  A rare day in June, indeed, but hardly a perfect one in politics.

It’s also the first day of Dairy Month.  Because of covid we will have no Cows on the Concourse this year, and few if any Breakfasts on the Farm.  Even the 84 cows that comprise the research dairy herd on campus have been shipped up to the Arlington Research Station for the duration.

Think what this means.  Right now is one of the few times, perhaps the first time, since the university farm opened in the 1870’s (perhaps earlier) that no cows have been abiding on campus. This is the University of Wisconsin’s equivalent of the ravens leaving the Tower of London.

So it’s a good day to recall what cows mean to Wisconsin and especially to the University of Wisconsin.  Walt Disney intoned, “I only hope that we never lose sight of one thing: that it was all started by a mouse.”  I like to paraphrase this thusly: “Always remember, never forget: when it comes to life science research at UW, it nearly all started with the cows.”  The list is long:  the Babcock Milkfat Test, the Cold Curing of Cheese, the Discovery of Vitamins, the Development of Warfarin, the Use of Semen Extenders in Artificial Insemination, and the Discovery of Immune Tolerance, for starters.

Here are some Wednesday Nites @ The Lab to help us remember that research on the cows have long put the wows into the reputation of UW.

Dave Nelson speaks on Babcock, Hart and Steenbock and milestones in the discovery of vitamins starting with the single grain study with cattle.  (From History Sandwiched In, although Dave gave a similar talk to WN@TL the PBS Wisconsin didn’t record). 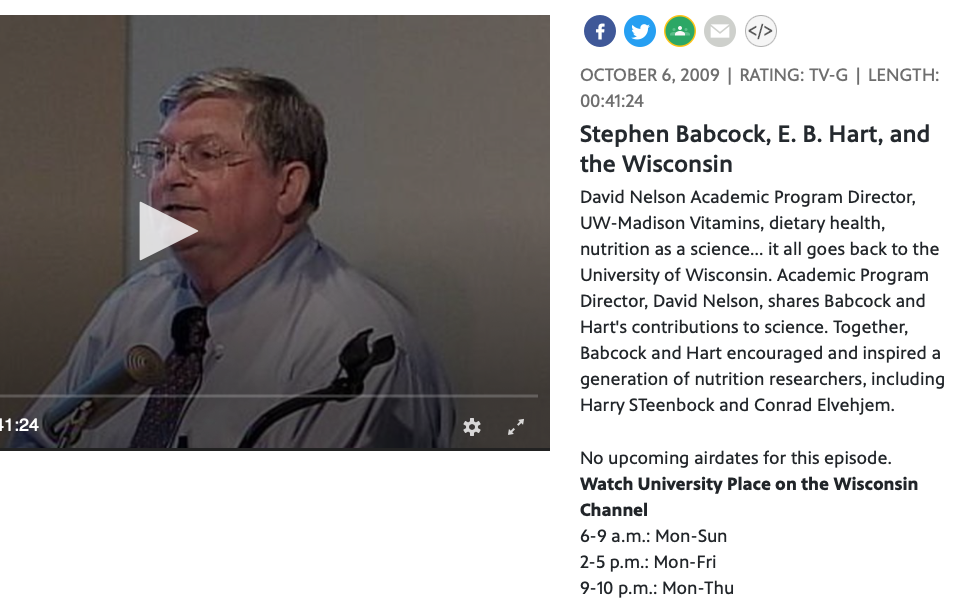 Ed Janus speaks on “Creating Dairyland”—how the Wisconsin countryside and culture was shaped by the coming of the dairy cow. 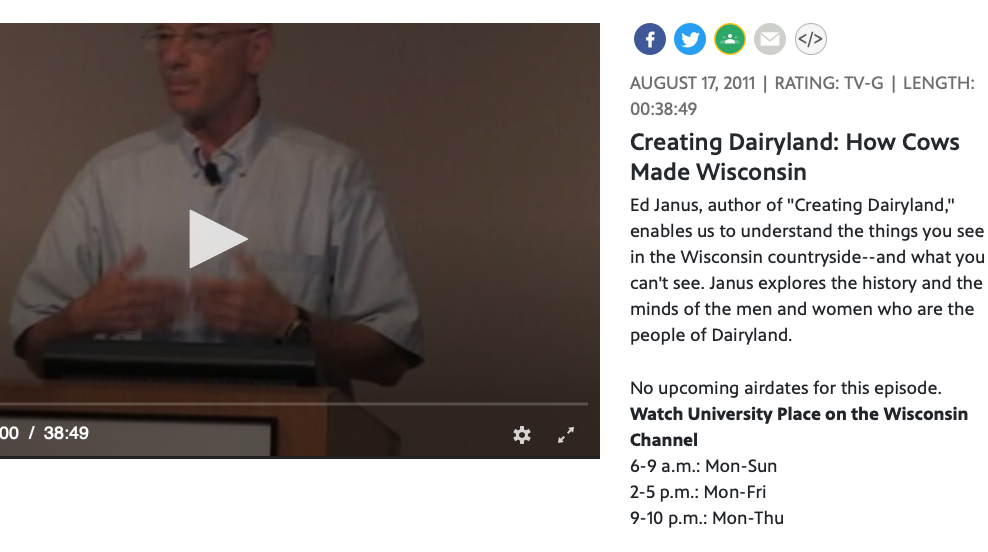 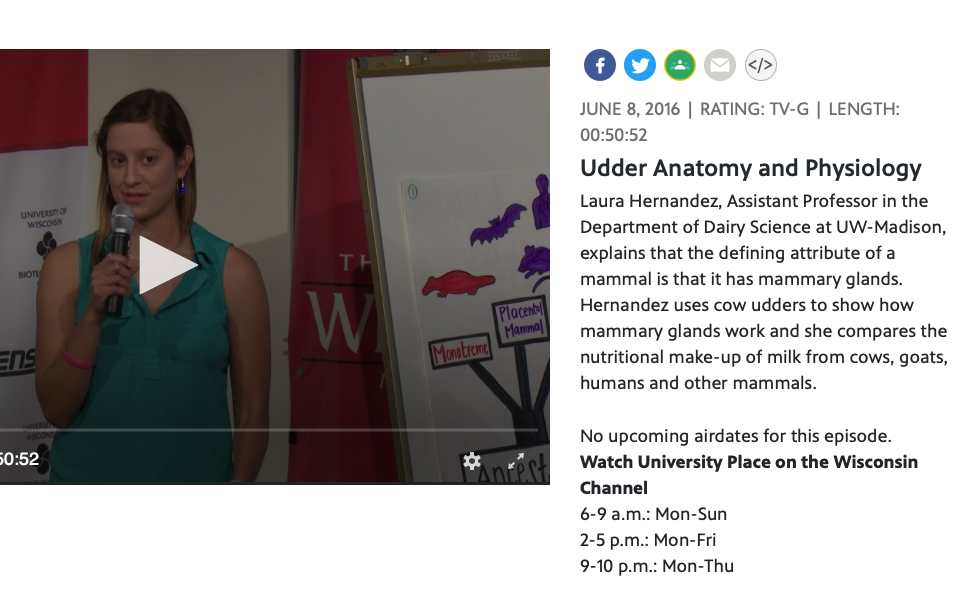 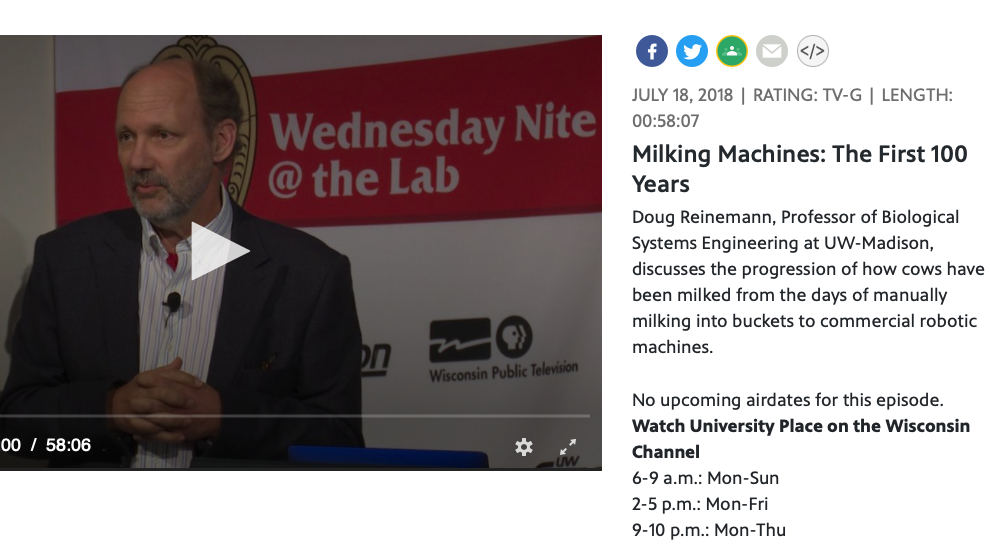 I hope the cows will soon be back on campus, and I hope to see you sometime soon once we can resume Wednesday Nite @ The Lab.