A User’s Guide to Wednesday Nite @ The Lab

Wednesday Nite @ The Lab is a public science series offered every Wednesday night, 50 times a year, starting at 7:00 pm in Room 1111 (The Auditorium) in the Genetics Biotechnology Center building, 425 Henry Mall, Madison WI, on the campus of the University of Wisconsin-Madison.  The website is https://science.wisc.edu/wednesday-nite-at-the-lab/.
WN@TL is free and open to all.  It has run continuously since February 2006. Currently we average 61 people a night.
WN@TL is a research seminar at which researchers share their work in a way geared for a public audience.  Most presenters are from UW-Madison.
The Introduction starts at 7:00 when the emcee, usually Tom Zinnen, gives a quick overview of the upcoming talks, and then introduces the speaker and the topic.
The Talk runs for about 50 to 55 minutes and includes a powerpoint or similar.
After the talk is The Q & A, which runs as long as the audience has questions.
After the Q & A is The “Linger at the Lectern” at which people chat one-on-one with the speaker.
Room 1111 features 132 seats, plus 4 spaces to accommodate wheelchair users.
The room is looped to enable hearing-aid users to hear the audio directly through their hearing aid.
Parking is available for a small fee in Lot 20, which is attached to the Genetics Biotech Center. The address of Lot 20 is 1390 University Avenue, Madison WI.  Lot 20 and the Genetics Biotech Center are handicapped accessible:  you can stroll or roll with no steps to climb from your car in Lot 20 to your chair in the Auditorium.  You can park out of the rain in the lower level of Lot 20.  To check on the number of available parking spaces in Lot 20, please see https://transportation.wisc.edu/parking-lots/lot-occupancy-count/
The Genetics Biotech Center is served by the following Metro bus lines:  1, 2, 3, 8, 10, 12, 14, 15, 19, 27, 29, 37, 48, 56, 57, 58, 70, 71, 72.
===
How can I watch WN@TL if I can’t come to the Biotech Center?
All WN@TLs are streamed live and in high definition at biotech.wisc.edu/webcams
All WN@TLs are available within 48 hours for viewing on the WN@TL YouTube channel at https://www.youtube.com/channel/UCrS-7it_Bu4UZiDqc16YpWQ
Currently 534 people subscribe to the WN@TL YouTube channel.
===
Many WN@TLs are also recorded by Wisconsin Public Television for later broadcast on WPT’s University Place series at wpt.org/universityplace.
You can find the broadcast schedule at https://wptschedule.org/series.php?SeriesID=577.
You can find the monthly schedule at https://wpt.org/sites/default/files/UPlace-Monthly-Calendar.pdf
You can watch WN@TL in archive at the PBS site, https://www.pbs.org/show/university-place/collections/wednesday-nite-lab/
WN@TL also appears on WPT’s Roku channel.
You can also watch WN@TLs on the University Place archive at wpt.org/universityplace.
You can use the “Filter Categories” tool at wpt.org/university place to make a list of all WN@TLs.

Under “Lecture Series” pull down and select “Wednesday Nite @ The Lab.” 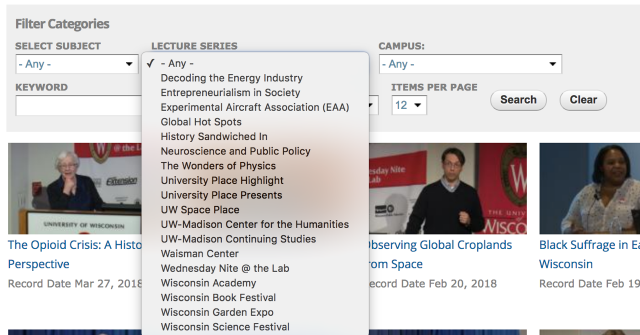 Hit the “Search” button and thel WN@TLs recorded and archived by WPT will appear. 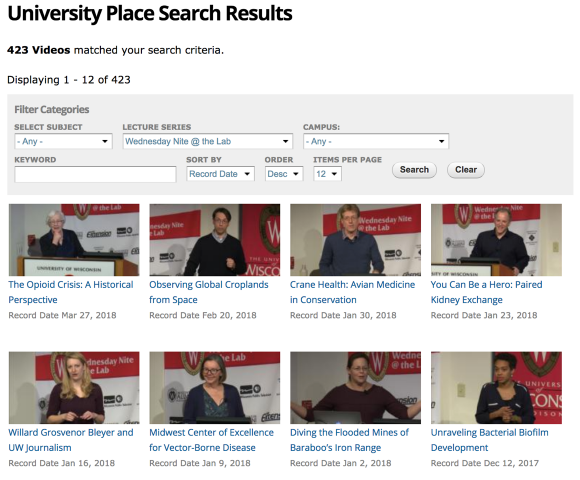 =====
WN@TL Newsletter.  Tom Zinnen sends a weekly missive every Tuesday to introduce the upcoming talk and to send out the latest list of upcoming speakers.
You can subscribe by sending an email to: wednesday-nite-at-the-lab+subscribe@g-groups.wisc.edu
You can unsubscribe by sending an email to: wednesday-nite-at-the-lab+unsubscribe@g-groups.wisc.edu
Currently 803 people subscribe.
===
WN@TL website is at https://science.wisc.edu/wednesday-nite-at-the-lab/
The site includes a description of the upcoming talks, biographies of the upcoming speakers, and links to websites where you can explore more about their work.
WN@TL is promoted on Twitter at @sciencewiscedu and @WedNiteAtTheLab.
WN@TL is promoted on Facebook at https://www.facebook.com/UWMadisonScienceOutreach/
WN@TL is listed on today.wisc.edu, the online calendar of the University of Wisconsin-Madison.
WN@TL lineup sheets such as this one are sent in the weekly missive and are posted on the @sciencewiscedu Twitter and at the UW-Madison Science Outreach Facebook page.
WN@TL is a joint Wisconsin Idea production of the BioTrek Outreach Program of the University of Wisconsin-Madison Biotechnology Center and UW-Extension Cooperative Extension, the Wisconsin Alumni Association, the UW-Madison Science Alliance, the Participatory Learning And Teaching Organization (PLATO), and Wisconsin Public Television.
===
WN@TL poster at https://broaderimpacts.net/wp-content/uploads/2015/09/b6_zinnen_bi_summit_2015.pdf
WN@TL started with funding from the Baldwin Wisconsin Idea Fund
The “Wednesday Nite @ The Lab” title comes from the public science series entitled “Wednesday Night at the Lab” at the University of Illinois.  Here’s the book based on the UofI series:
https://www.amazon.com/Wednesday-Night-Lab-Bioengineering-Contraceptives/dp/0060454091/ref=sr_1_1?ie=UTF8&qid=1529764738&sr=8-1&keywords=wednesday+night+at+the+lab