We’re being soaked by the remnants of tropical storm that came ashore just east of New Orleans and flew straight as an arrow due north. It’s a strange year.

For another example, today was supposed to be the last day of classes at Madison public schools. The buildings have been closed down since March 13; by a promethean feat of improvisation, the MMSD teachers and their technology colleagues have kept the lamps of learning burning. MMSD students and their parents, and many other students & parents all over the world, have been baptized into a collegiate world of classwork that requires diligence, planning, prioritization, checklists, timetables and deadlines.

The past three months have been a kind of education in Expeditionary Management.

But at the Nobelist sang, the times they are achanging, and not only in the classroom. In few scholarly fields are the relationships between nations, and the cultures among researchers, changing in such profound ways as in anthropology and paleontology.

So this week it is my pleasure to remind you of the WN@TL presentations of John Hawks, and of the presentations of his associates Alia Gurtov and Sarah Traynor, on their expeditions with their collaborators from South Africa to uncover and describe Homo naledi.

These are impressive not only for their brilliant science, but also for how they illustrate the ways scientists are changing the culture of doing science, of making & sustaining collaborations, and of engaging the public in the sharing in the discovery. 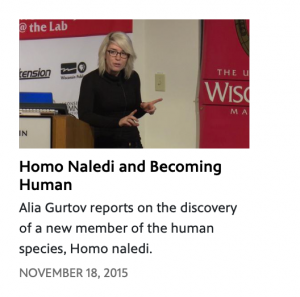 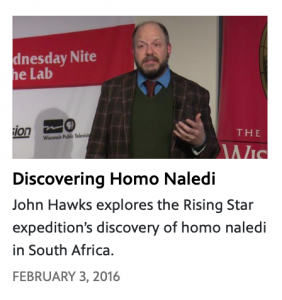 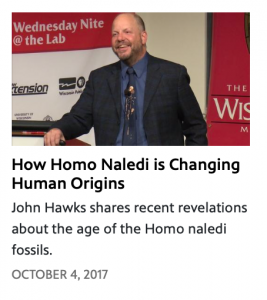 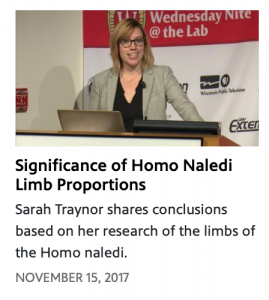