On the Great Seal of Wisconsin are two workers: a miner and a sailor. Rocks and waters have been of the essence for a long time in the Badger state.

Rocks & waters have also been a big deal at the University since its inception.  The UW Geology Museum traces its veins back before statehood and is older than the U.  When the original Science Hall burnt down in 1884, among the greatest losses among the ashes were the museum’s collections of minerals and fossils.

Three years later, a geologist who had grown up in Rock County, Thomas Chamberlin,  became the pivotal president of the university who launched the campus on its path to being a pioneering research institution among state universities.

In 1903, a geologist born and raised in Rock County, Charles Van Hise, became the president of the university who fueled an expansive statewide vision of what became known as the Wisconsin Idea and an equally expansive view of the UW’s intellectual reach.  The research Van Hise performed while he worked in the new “Science Hall.” (clearly a geology building because it includes a period in its name as set in stone) later served as the leading reason for the building becoming a National Historic Landmark (see page 8 of the NHL nomination).

Today the field of geology is advanced at UW-Madison by the Department of Geoscience, including the UW Geology Museum, and by the Wisconsin Geological & Natural History Survey, part of the Division of Extension.

WGNHS has long had a far-reaching public outreach program, and the most recent person to lead and expand that work has been Carol McCartney, a hydrogeologist who earned her PhD in Geology at UW-Madison in 1979 under Prof David Mickelson.

Carol has been a splendid colleague in science outreach on campus and in communities across Wisconsin. She’s staffed Exploration Stations at State Fair and at Wisconsin Farm Technology Days, at UW Science Expeditions and at the Wisconsin Science Festival, at Family Science Nights and at Super Science Saturdays.

You can see Carol’s congenial collegiality in the emphasis of the Survey’s outreach communications & Twitter feed that feature the folks at the Survey from the undergrad hourlies to the grad students and post-docs, through the professional staff and the Survey’s collaborators at other colleges.

Unsurpassed in her many gifts to me has been the unbroken string of outstanding WN@TL talks given by geologists she nominated. 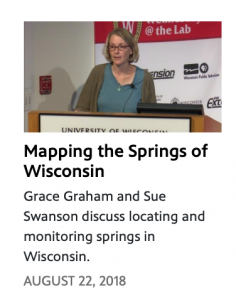 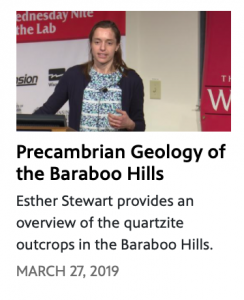 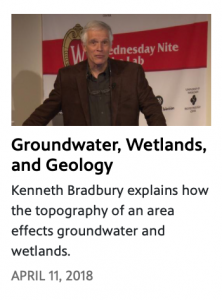 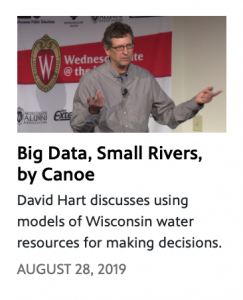 Carol has been a gem as a geoscience impresario, and she also gave a jewel of a talk on Charles Van Hise’s field notebooks and his dazzling microscopic lithology slides of crystalline rocks. 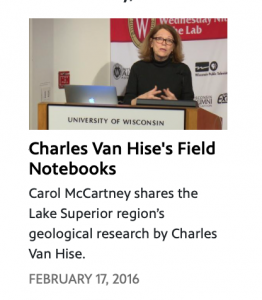 Carol has invited us all to explore, to see, to understand, and to explore some more:  this is the legacy in outreach that she passes on to her colleagues at the Survey.