It was two months ago today that the covid news came out and the campus quickly closed down.  Much of the news since then has been grim, and deadly.  Today was no exception, except that today also came the happy announcement that the National Oceanic and Atmospheric Administration has selected the Space Science & Engineering Center to continue to host of the Cooperative Institute for Meteorological Satellite Studies. 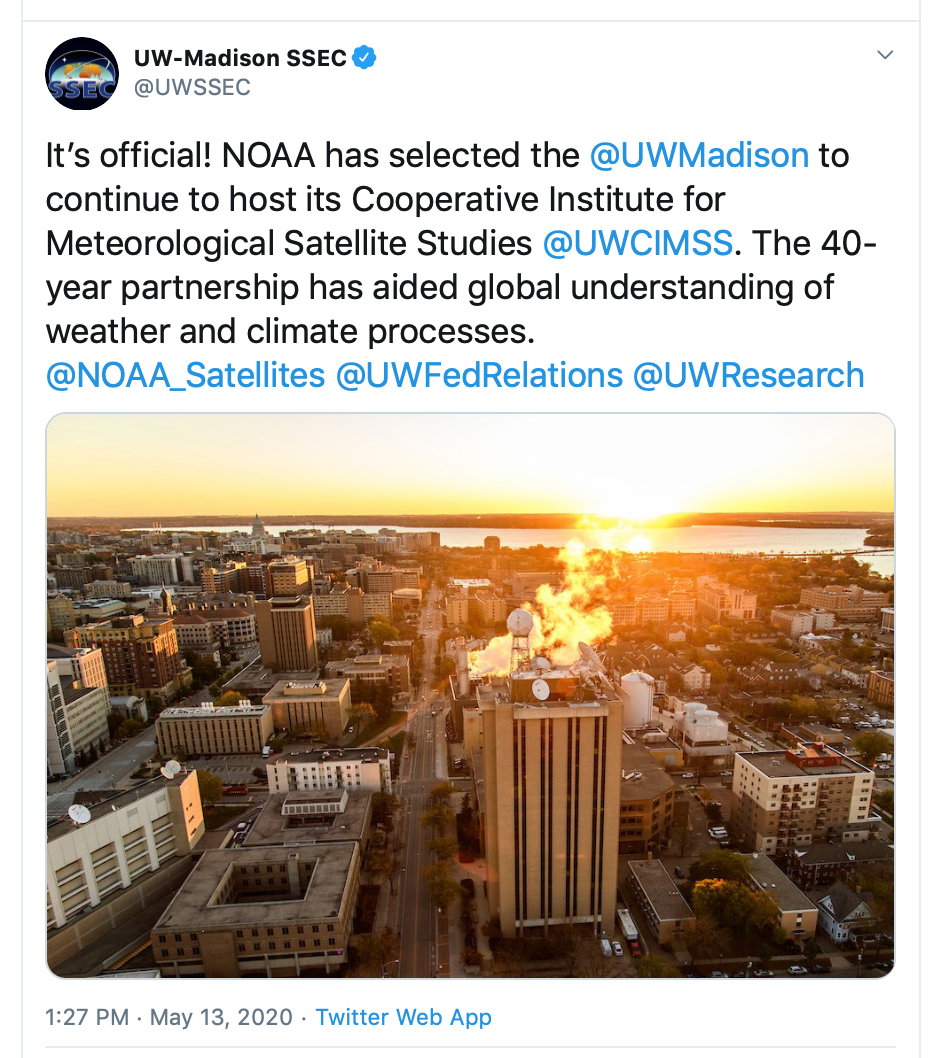 This university lies some 800 miles from the closest salt water, be it James Bay to the north, Chesapeake Bay to the east, or the Gulf of Mexico to the south.  And yet UW-Madison hosts a Department of Atmospheric & Oceanic Studies and a building by nearly the same name—with Space Sciences added on.

Our campus is the cradle of meteorological satellites and continues to be the Mecca of the field. That is why the AOSS Building has more dishes on its roof than most restaurants have on their menus. The torrent of data streaming atop that tower is among the most powerful of all civilian facilities in the US.

Many mythologies tell of great beings who come down from the Heavens, bringing Promethean gifts of fire and foresight from on high.  But humans have gone up into the blue in balloons, planes and rockets, and have placed satellites as our eyes in the skies.  Some like Hubble gaze out into the abyss.  Others, like weather satellites, look homeward.

The satellites let us see and, like the mythical gods, they let us foresee.  We can predict the weather with increasing accuracy and we can project the climates with increasing confidence.

So this week, I’m happy to celebrate the happy news that CIMSS will continue here at its birthplace by featuring four talks that speak to the power of storms and to the awesome energy transport systems that are Earth’s atmosphere and oceans.

First, tornadoes, the dangerous & deadly storms that stalk the Midwest and that haunt our nightmares.  Leigh Orf gave us the most butt-clenching visualizations of twisters since The Wizard of Oz with his talk, “Supercomputer Modeling of Tornadoes.”

Second, derechos, a term that was new to me in 2013, but was also a vision that flashed in my memory since I watched from the stern of my canoe as the roiling stormfront bulldozed across the sky over Lake One in the Boundary Waters at 12:35  on Sunday afternoon, July 4, 1999.  Jonathan Martin nearly sent me into the cellar with his talk on “Tornadoes & Derechos in Central North America.”

Third, the breath-taking beauty of the many-colored images and videos that the GOES-16 Satellite provides us every day.  Like a latter-day Harvey, we can watch the circulatory systems of currents and storms in the atmosphere and in the oceans.  Tim Schmit tuned us in to the “Benefits from the New GOES-16 Satellite.”

Finally, “The Storm That Sank the Edmund Fitzgerald” from Nov 4, 2015, on the occasion of the 40th anniversary of the loss of the good ship and crew of 29 sailors.

Steve Ackerman, who gave this talk, has recently become Vice Chancellor for Research & Graduate Education, and as such is the Chief Research Officer of the campus.  It’s a good omen to have at the helm a seafarer who can see far.