Skip to main content
University of Wisconsin–Madison
For December 11, 2019                Please share this with your friends
Hi WN@TL Fans,
We had a sandbox in the early 1960’s in the backyard at 118 College Avenue in Dixon, and about once a year in late spring my Dad would load us up into the 1957 Bel Air along with a shovel and several old-school metal ash cans and head out to a road cut on Illinois Route 2 south of Grand Detour and just north of the curve at Lost Nation Road.  The cut was through St. Peter Sandstone, and the reddish-golden sand was there for the spading, free and from the bounty of the State.
When delivered back home the sand was pristine and moist and cool and at peak color.  In the first hour or two with the New my brothers and I did our best to wear it out or break it in.
We didn’t put a cover over our sand boxes back in the mid-XXth Century, and so it came to pass that after a week or two we would discover that the neighborhood cats, too, liked the New.
A cat takes to clean sand like a moth to a candle.  The difference, of course, is that the moth leaves but a wisp of smoke, while a cat leaves a more substantial souvenir.
I don’t remember when I first heard about Toxoplasmosis and cats and life cycles, but starting at about age 5 would have been an apt time.  Especially since my Mom was pregnant pretty much continuously from 1955 to 1966.
The dangerous connections between Toxo and cats and kids and moms and food are ones that have long earned our attention.
This week (December 11) Bruno Martorelli Di Genova of Medical Microbiology & Immunology will be here to piece together the puzzle of how he and other researchers in Prof Laura Knoll’s lab have coaxed the toxoplasmosis parasite to go through its sexual lifecycle in a mammal other than cats—in this case, in mice.  Here’s how he describes his talk, entitled “Host Fatty Acid Metabolism Modifies the Toxoplasma Life Cycle”:
Toxoplasma gondii is a microbial parasite that infects humans and completes its full life cycle only in cats. Toxoplasma is the leading cause of foodborne illness in the US, according to the CDC. The most common route of infection for the human is by consumption of contaminated raw or undercooked meat. Cat litter can also be a source of Toxoplasma infection. However, cats can only shed oocysts once in their lifetime. Pregnant women are urged to avoid eating raw or undercooked meat, as also avoiding cleaning the litterbox after 48 hours, to prevent Toxoplasma infection. Congenital toxoplasmosis can have potentially severe consequences for the unborn child.  Toxoplasma can live asexually in any mammal, including humans. Nevertheless, it has its sexual cycle only in cats, a restriction discovered in the 70s, but whose reason was not explained. Cats lack an enzyme called delta-6-desaturase, an important enzyme for fatty acid metabolism. The absence of this enzyme is responsible for the high levels of linoleic acid in the cat intestine, but not in other mammals. Our findings suggest that the accumulation of this nutrient in cats is the limiting factor for Toxoplasma to reproduce sexually. An improved understanding of the parasite life cycle stemming from this study may lead to the production of vaccines that could inhibit Toxoplasma’s sexual reproduction or the transmission of Toxoplasma to livestock. About the Speaker: 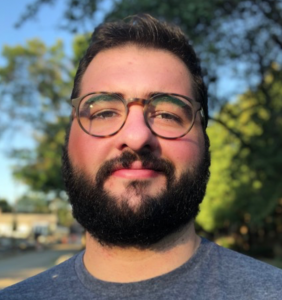 Bruno Martorelli Di Genova
I am a postdoc in the lab of Professor Laura Knoll. I was born in Brazil and did all my education there.  Since I was an undergrad I have been working with intestinal pathogenic protozoans.  I moved to Wisconsin back in 2016 and I have been working since then with Toxoplasma and its sexual life cycle.
Links:
https://www.cdc.gov/parasites/toxoplasmosis/index.html, https://journals.plos.org/plosbiology/article?id=10.1371/journal.pbio.3000364, https://www.thelancet.com/journals/lancet/article/PIIS0140-6736(04)16412-X/fulltext
=== 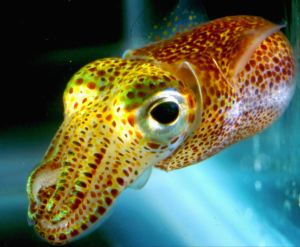 Next week (December 18) Prof Mark Mandel of Medical Microbiology & Immunology will be here to help us look into the light of Vibrio bacteria that live within bobtail squid.
As he writes:  “There is an increasing appreciation that microbes perform beneficial functions for animals and humans. Studying how these critical associations form has been advanced by studies in model organisms. The Hawaiian bobtail squid has a specific luminescent bacterial partner that helps to camouflage the squid host. We will discuss how this partnership forms to understand more about beneficial microbes and their animal hosts partner up in specific ways.”
And that will close out 2019 for WN@TL.  After a talk about the light, we’ll go dark for both Christmas and New Year’s.  We’ll be back on January 8, as usual.
Hope to see you this week at Wednesday Nite @ The Lab!
Tom ZinnenBiotechnology Center & Division of Extension
UW-Madison