Skip to main content
University of Wisconsin–Madison
For December 4, 2019
Hi WN@TL Fans,
Being a gardener by hobby and a plant pathologist by profession, when I first visited Paris in July 1986 I made sure to head to the Latin Quarter, therein to the Place Jussieu, and therein to stroll through the Jardin des Plantes.  As best as as I could read “les exhibits” (je suis effluent en francais), the original name of the place was Le Jardin Royal des Plantes Médicinales—the Royal Garden of Medicinal Plants.
For me, plants were mostly about food for the stomach, pleasure for the eye and nose, and delights of the meadow and forest.  I’d heard of herbalists and the like but I’d not quite realized how much a mainstream role plants had played as medicines  for so long and so well.
As a grad student at UW-Madison somehow I had missed how the School of Pharmacy had operated a Pharmaceutical Experiment Station, and how within that Station were Medicinal Gardens (2.5 acres in Camp Randall beginning in 1909), and also plots for testing ways to better grow medicinal plants, and also laboratories for designing & devising better ways to extract & compound key extracts & compounds from those plants, and for generating assays to test the purity and potency of the compounds as drugs.
What a splendid intellectual concoction is an Experiment Station of any stripe.A December 1914 publication on the Pharmaceutical Experimental Station included a photo of a field of cannabis and coriander. 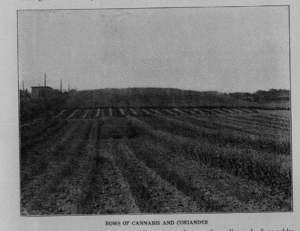 The text surrounding the photo encapsulated the debate raging at the time regarding the future of drugs:  “The question has been asked why we should bother at all about medicinal plants when vegetable drugs…are being displaced in medical practice by the synthetic remedies manufactured in the “Farbenfabriken” of [Germany]….”
(I note the Great War was yet Very Young in December 1914, but the dye-making factories already were being retooled to make things that made people die.)This ‘extract vs synthesize’ argument, this ‘garden vs laboratory’ issue from lo! a century ago has found a resonance today in the streets and shops and homes of communities across Wisconsin and the nation.
No compounds capture this better than CBD oil in specific and the cannabinoids in general.  Are the ingredients and formulations effective?  At what doses?  For what diseases?  With what side effects?This week (December 4) Natalie Schmitz of the School of Pharmacy will wrangle with these and other perplexities in her talk entitled “Deep Into the Weeds:  Cannabinoid Pharmacology, Therapeutics & Risk.” 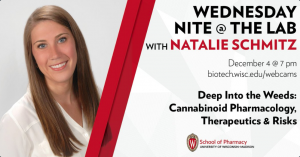 Here’s how she describes her talk:Cannabinoid use has increased following changes in State and Federal policy. Cannabinoids are thought to treat a myriad of diseases and symptoms, and are available in many different routes of administration including inhalation, oral, sublingual, and topical. We will discuss cannabinoids, how they work, evidence behind their use, and possible risks.About the Speaker:
Natalie Schmitz, MPA, PharmD, PhD is an Assistant Professor in the Pharmacy Practice Division at University of Wisconsin’s School of Pharmacy. Prior to joining University of Wisconsin, Dr. Schmitz earned her Master of Public Administration and PharmD at Drake University and then pursued her PhD in Experimental and Clinical Pharmacology at University of Minnesota while working as a Medical Cannabis Pharmacist. Dr. Schmitz’s translational research program focuses on optimizing therapies, particularly cannabinoids, for neurologic conditions by investigating pharmacokinetics, pharmacodynamics, exposure-response, safety and efficacy.Links:
The National Academies of Sciences, Engineering, Medicine. The Health Effects of Cannabis and Cannabinoids: The Current State of Evidence and Recommendations for Research. www.nationalacademies.org/CannabisHealthEffects. Whiting P, Wolff R, Deshpande S, et al. Cannabinoids for Medical Use: A Systematic Review and Meta-Analysis. JAMA. 2015;313(24):2456-2473. https://jamanetwork.com/journals/jama/fullarticle/2338251===Next week (December 11) Bruno Martorelli Di Genova of Medical Microbiology & Immunology will be here to piece together the puzzle of how he and other researchers in Prof Laura Knoll’s lab have coaxed the toxoplasmosis parasite to go through its sexual lifecycle in a mammal other than cats—in this case, in mice.
Or as Steinbeck almost had it, it’s a story Of Cats & Mice & Men.
Hope to see you this week at Wednesday Nite @ The Lab!
Tom ZinnenBiotechnology Center & Division of Extension
UW-Madison