Please stream to your friends and neighbors.

In contrast, a dry year can leave a smaller stream but a limpid ribbon. A  serious drought year, one like 1988, can reduce even sizable rivers like the Rock to shallow rivulets where a paddler steps out one’s Grumman canoe to drag the silver hull across a stretch of wet stones in search of a passable channel.

But late summer of 2019 has been a good season to float your boat downstream, with rivers flush with waters from creeks that drain fields and forests, and with waters from springs that flow forth from aquifers that reach far back up into the hills.

It’s the kind of year when Stuart Little would have had little difficulty paddling away in his murine craft Summer Memories, if only EB White had been so kind to have set the story in the Driftless. 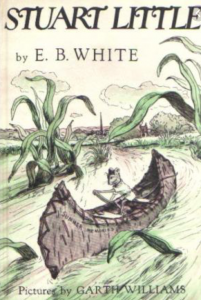 This week (August 28) Dave Hart of the Wisconsin Geological & Natural History Survey will be here to tell a different kind of a canoe-borne story.  He’ll give a river talk — specifically, to show us how he and his team have tricked out a canoe with sensors of all sorts to record streams of data about the stream upon which they float their boat.  One such stream is the Grant River in Grant County, as it flows through the woodlands and fields and pastures on its way to the Mississippi.

Appropriately enough, Grant River and Grant County were named for a long-ago trapper who had a cabin on the river.  And here all along I thought the county was named for Ulysses S.

This week I’ll be in the Boundary Waters, paddling on the Kawishiwi River, portaging into Lake Insula, and on to Eddy Falls.  Bea Mumm, of Bloomington in Grant County, will be your emcee.  Another surprising confluence of coincidence is that Bea recently travelled to Botswana, which is the country where Dave served in the Peace Corps some 30 years ago.Sometimes, you gotta just go with the flow.

Dave Hart studied Physics and Math at Luther College in Decorah, Iowa.  He served in the Peace Corps as a science teacher in Botswana.  He then earned his MS and his PhD in Geophysics here at UW-Madison.  He joined the Wisconsin Geological and Natural History Survey in 2001 where he works as a hydrologist.

Next week (September 4) we commemorate the 80th anniversary of the beginning of WW2 in Europe as Chris Zaczyk of the Biotech Center tunes us in to the next stages of the “Missing in Action” Project here.

The MIA Project seeks to speed the recovery and identification of remains of US armed forces.  The Project focuses on bringing university resources and DNA technology into collaborations with the Department of Defense and with host countries, including most recently France and Belgium.