This week, for the 4th of July: a hiatus, a break, a pause.  WN@TL goes dark on a day when little towns all over the country light up the night as these United States of America celebrate the anniversary of our Declaration of Independence and its dedicated proposition that all men are created equal.

As a scientist, I’m always pleased and grateful to note that of the five drafters of the Declaration, two were accomplished scientists—and Benjamin Franklin was even a fellow of the Royal Society.

The University of Wisconsin’s Extension work in communities around Wisconsin goes back at least to the Farmers Institutes in the 1880’s.

Public Broadcasting in the United States originated right here in Wisconsin with radio broadcasts from the UW Department of Physics in 1917.

These are important milestones to me because I work for both the Biotechnology Center and  Cooperative Extension, and because Wisconsin Public Television has recorded and rebroadcast more than 420 episodes of Wednesday Nite @ The Lab starting back on October 17, 2007. 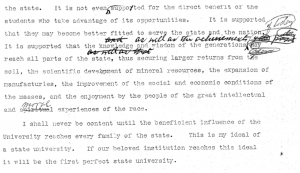 Next week (July 11), Elizabeth Planalp of the Waisman Center shares her research into the Emotional World of Infants.   For my kids, I woulda spelled it “whirled.”

Hope to see you soon at Wednesday Nite @ The Lab.”It is their right, it is their duty….”  Happy Independence Day!