Come Explore the Unknown!
By Zoom:  at go.wisc.edu/240r59.
In Person: Room 1111 Genetics Biotech Center, 425 Henry Mall, Madison.
7pm Central
For 23 February 2022
Hi WN@TL Fans,
My grandmothers roped me in to the fiber crafts.  One taught me to knit with kneedles and showed me that not all purls come from oysters. The other taught me how to weave, starting with a square red metal loom with upright teeth for making potholders.
This loom, this weaving, required no shuttle, and the warp and weft were of loops of the same materials and heft.  The loops mattered, and the quality varied widely; the nylon loops were pathetic scrawny things, while the big fat cotton loops were the juiciest finds at Woolworths at the corner of First Street & Hennepin Avenue.
This weaving was more than back-and-forth.  A half-hour of diligent fingerwork could all hang by a thread during the process of taking the potholder off the loom by close-hooking the loops, loop by loop, around the four sides of the piece.  If the piece popped off the frame, it could quickly unravel.  But when the perimeter gauntlet was run, and the potholder was done, one had the sublime satisfaction of having at hand a handiwork whose prime purpose was to protect the hand that made it.  It also felt surprisingly good to launch right away into making the next one.
One Christmas I got another kind of loom, a tough plastic one with a shuttle for the weft and a heddle for the lifting the warp and a batten for beating the latest weft into place. This was a whole ‘nuther part of Idaho.  The speed of the shuttle, the efficiency of the heddle, the thud-thud of the batten–this was a machine, and it hinted at the huge industrial looms that girls of my grandmothers’ generation might have tended when they were 10 in 1910.
Looking back, it was not just the looms that were the gifts:  the loom were frames for elegant ideas, test-beds for creativity.  They were first-hand experience with a technology stretching back into pre-history;  they were fountains of modern metaphors.   In some later years, when I made my living as a writer, I came to realize weaving is to textiles as crosswriting is to text:  two threads proceeding at righteous angles to each other, yielding remarkable density and compactness.  And always, always, the texture matters.
=== 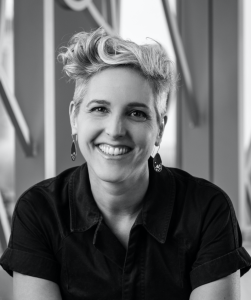 Marianne Fairbanks
On February 23 Marianne Fairbanks of the School of Human Ecology returns to Wednesday Nite @ The Lab to share her sagas of ingenuity, innovation and entrepreneurship as she describes how she invented, patented and brought to market her hand-held “Hello Loom!”  Here’s how Prof. Fairbanks describes her talk entitled “Design, Innovation, and Entrepreneurship: the Case Study of ‘Hello Loom!’”
Description:  Weaving is the interlacement of threads at a 90 degree angle used to construct cloth that has been used for shelter and protection for over 12,000 years. While there are many ways to hold threads in tension on a loom or frame, Hello Loom, a hand-held laser-cut loom, designed by Associate Professor Marianne Fairbanks, offers portability and access to weaving in hopes of finding new ways to connect modern makers to this ancient technique. The small laser cut loom design, the size of a cell phone, was first developed as part of her social weaving project called Weaving Lab, hosted at the Wisconsin Institute for Discovery in the summer of 2017 and 2018. Later, when traveling to Scandinavia for her Weaving Lab project, Fairbanks invited 40 Danish weavers to make small woven works on Hello Looms to see the range of current weaving practices. These weavings are now on exhibit as part of a show currently on exhibit at the Center for Design and Material Culture. Fairbanks will discuss the evolution of Hello Loom and how she has patented the design with the help of WARF. The idea grew into a business when Fairbanks realized how many people were eager to have their own experience with weaving. The mission of Hello Loom is to get as many people excited about the limitless possibilities of weaving that are found in combining colors, texture and patterns. Beyond the aesthetic and tactile pleasures of weaving, Fairbanks works with engineering and horticulture faculty to innovate textile-based solutions for a sustainable future.

Bio: Marianne Fairbanks is a visual artist, designer, and associate Professor of Design Studies at the University of Wisconsin-Madison. Her work spans the fields of art, design, and social practice, seeking to chart new material and conceptual territories, to innovate solution-based design, and to foster fresh modes of cultural production. She received her MFA from the School of the Art Institute of Chicago and her BFA from the University of Michigan. Her work has been shown nationally and internationally in venues including The Museum of Art and Design, NY, USA, Copenhagen Contemporary, Copenhagen Denmark, RAM Gallery, Oslo, Norway and The Röhsska Museum of Design and Craft, Gothenburg, Sweden. 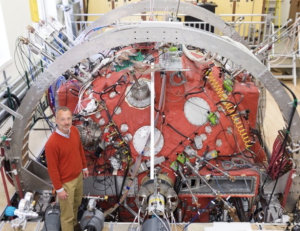 On March 2 Cary Forest of the Department of Physics will warm up the room with his talk on “Fusion Energy, Solar Flares and Black Holes in the Wisconsin Plasma Physics Lab.”
Description:  Plasma Physics is the overarching discipline describing plasma, the hot and energetic state of matter that makes up 99% of the visible universe. In my talk I will introduce you the exciting world of experimental plasma physics in which we build devices, here on Earth that replicate and mimic what we see in the Universe: from fusion energy powered stars; planetary and stellar magnetic fields spontaneously created by flows of plasma and liquid metals; spontaneous explosive bursts of plasma in solar flares that hammer our planet, satellites, and astronauts; and accretion of plasma onto supermassive black holes that gives rise to the galaxy sized radio jets that accelerate cosmic rays in the Universe.  Each of these systems is built up from plasmas and have processes that can be studied terrestrially, which is what we do in the Wisconsin Plasma Lab.   Experiments consist of big rooms, heavy equipment like large vacuum chambers, intense amounts of electric energy in the form of magnetic fields, high voltage power, and microwave heating, and specialized diagnostics to measure properties of plasma at temperatures greater than 100000 degrees.
I will tell two stories in my talk. The first will describe a recent experiment we carried out to investigate how plasma might break away from the magnetosphere of our Sun and give rise to the Solar Wind that fills our solar system. This experiment complements a recently launched NASA mission called Parker Solar Probe that is a satellite that is now probing close to the sun.
The second will be about revisiting an old idea called the magnetic mirror with new technology for making fusion in a simpler and more useful way than currently envisioned in reactors along the path that Iter is going. We are now building a new experiment called the Wisconsin High-Temperature-Superconductor Axisymmetric Mirror (WHAM) at the Physical Sciences Lab to test our ideas.
Bio:  Prof. Cary B Forest received a Bachelor of Science degree from the University of Wisconsin in 1986 in the Applied Math, Engineering and Physics program and then attended graduate school at Princeton University where he received a Ph.D. in 1992 in Astrophysical Sciences.  In the course of his thesis work he invented and demonstrated a novel method for “bootstrapping up” a tokamak (a donut shaped magnetic bottle used to confine hot fusion plasmas) and helped build the first “spherical tokamak” in the US.
After graduate school he spent 5 years working at a private company, General Atomics, as a Scientist where his work focused on advancing the tokamak towards a fusion reactor.
Forest’s research program at the UW since 1997 is on the border between nuclear fusion research and laboratory plasma astrophysics.  During his time at Wisconsin, Forest’s group has brought into operation four (and soon five) new major experiments, including the Madison Dynamo Experiment (sodium), the Rotating Wall Machine, the Plasma Couette Experiment, and the Big Red Plasma Ball in the Wisconsin Plasma Physics Laboratory. Most recently, Forest has reinitiated magnetic mirror research in the United States and is constructing the Wisconsin High Temperature Superconductor Axisymmetric Mirror (WHAM) device as a prototypical fusion reactor with both academic and industrial applications. Three of Forest’s students have received the Rosenbluth Thesis Award for best thesis in Plasma Physics from the APS.
At the UW, Forest has received the Romnes Fellowship, the Vilas Associate Award, the Kellett Mid Career Award and a WARF Named Professorship.  Nationally, he is the recipient of the Alfred P. Sloan Fellowship, the David and Lucille Packard Foundation Fellowship, is a Fellow of the American Physical Society, received a Research Award from the Alexander von Humboldt Foundation, and is a Fellow of Merton College, Oxford. He currently serves as Director of the Wisconsin Plasma Physics Laboratory.
Website   https://wippl.wisc.edu
=== 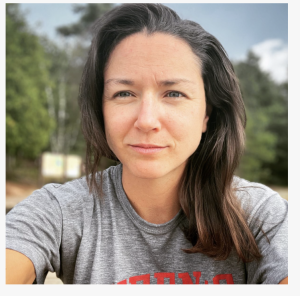 On March 9 Hilary Dugan of the Center for Limnology will spread the news about “The Impact of Salt on Wisconsin’s Freshwaters.”
Description:  We will dive into salinization of Wisconsin’s freshwater environments, and probe how, why, and where salinization is occurring–and what we can do to curtail current trends.
Bio: Dr. Hilary Dugan is an assistant professor at the Center for Limnology at the University of Wisconsin-Madison. As a limnologist, Hilary studies how terrestrial and atmospheric changes, such as warming air temperatures or land use patterns, alter biogeochemical fluxes and aquatic processes in lakes. Her research balances field-based programs, which rely heavily on sensor networks, with the use and development of analytical models, and the application of geophysical and geospatial tools. Her research focus is on temperate and polar lakes, with sites spanning from Wisconsin to Antarctica.
Links: https://dugan.limnology.wisc.edu/
https://aslopubs.onlinelibrary.wiley.com/doi/full/10.1002/lol2.10215
===
Remember, we’ve now shifted to Hybrid so we can both Zoom and gather in one Room—Room 1111 Genetics Biotech Center, 425 Henry Mall, Madison WI.
Hope to see you soon at Wednesday Nite @ The Lab!
Tom Zinnen
Biotechnology Center & Division of Extension, Wisconsin 4-H
UW-Madison
Please share this missive with your friends & neighbors.
If you’ll be watching for the first time, please register for the WN@TL Zoom at go.wisc.edu/240r59
If you’ve already registered for a previous WN@TL zoom this year, you’re good—you don’t have to register again.
Continue to use the link found in the confirmation message Zoom sent you when you first registered.
WN@TL begins at 7:00pm Central
You can also watch the web stream at biotech.wisc.edu/webcams for one last time on October 20.  The web stream thereafter will redirect viewers to the WN@TL YouTube livestream.
UW-Madison:  5.9 million owners, one pretty good public land-grant teaching, research and extension university.
Visit UW-Madison’s science outreach portal at science.wisc.edu for information on the people, places & programs on campus that welcome you to come experience science as exploring the unknown, all year round.
Here are the components of the WN@TL User’s Guide:
1. The live WN@TL seminar, every Wednesday night, 50 times a year, at 7pm CT in Room 1111 Genetics Biotech Center and on Zoom at go.wisc.edu/240r59
2. The WN@TL YouTube channel
3. WN@TL on the University Place broadcast channel of PBS Wisconsin
4. WN@TL on the University Place website 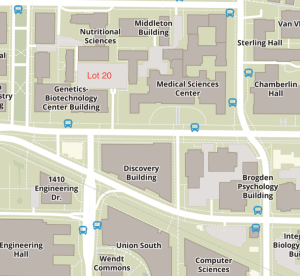