September 10, 2020
Please share this missive with your friends & neighbors.

Apocalyptic fires, historic risings, breathtaking derelictions, and a pox upon our house—or at least a pandemic upon our campus: it has been a maelstrom of a month since mid August.

On Wednesday, August 26, while my daughter Claire drove us across central Montana, I watched as my twitter feed reported that the Bucks were not taking the court for their playoff game. About 30 minutes later the Brewers joined the Bucks in the strike. I wondered what my Mom’s take would have been. She long admired Sandy Koufax for not pitching on Yom Kippur during the 1965 World Series. I don’t remember how she felt about Tommie Smith and John Carlos in the 1968 Olympic Games in Mexico City.

On Thursday night August 27 Claire, Will and I stopped for gas at the Cenex in Circle, Montana, about an hour west of Glendive. The woman working the store solo asked me where we were heading. I said back to Wisconsin. She replied, “Oh, back to the riots.” Close, I said — I live in Madison, but I have cousins in Kenosha.

We arrived back home late on August 28. My house is three blocks from Camp Randall, and in the handful of days in the run-up to classes starting on campus on September 2 I didn’t see much to convince me that the covid virus would not soon be burning brighter. After three days of classes came the long Labor Day weekend. As Lincoln might have intoned, “And the virus came.”

I don’t know who will be the next generation of historians of the University of Wisconsin-Madison to follow in the footsteps of Merle Curti & Vernon Carstensen, and of David Cronon & John Jenkins. Whoever they are, I anticipate they will not view 2020 as the Year of Ideal Visual Acuity. The ways the legislature, the governor, the supreme court, the regents, the city, the county, and the campus administration framed the issues and arrived at policies will take up a page or twenty.

I do know that I wish Steven Oreck was still among us. He was a surgeon and a historian with both spine and heart. His insights into how the state and the city and the university handled and mishandled the 1918-1919 influenza pandemic might cast light on the gauntlet we are making and running day after day 102 years later.

Therefore, I am pleased to feature his talk once again, for the times call out for it, and we can benefit from his critique and analysis. I am posting links to the PBS Wisconsin archive, which does not include the Q&A; and to the WN@TL YouTube archive, which does; and to Samantha Nash’s Wiscontext story. 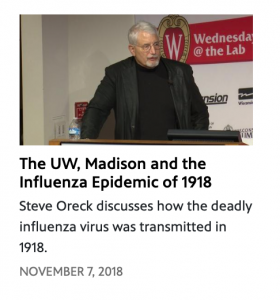 WN@TL YouTube Version  includes the Q&A.
The Wiscontext coverage of his presentation, by Samantha Nash.
====
At the end of Oreck’s Q&A, I said to the audience and to him, “This is one of the most remarkable talks we have had in the 13 years of Wednesday Nite @ The Lab, and I really want to thank you for the contribution to the history of the university and of the state.”    It’s even more true after 14 years of WN@TL talks.
O, sir, we hardly knew ye.   Steven L. Oreck, MA MD, died August 11, 2019.
Wisconsin Veterans Museum entries at
https://wisvetsmuseum.pastperfectonline.com/byperson?keyword=Oreck%2C+Steven+L.
===
I hope to see you sometime soon once we can resume Wednesday Nite @ The Lab.
Tom ZinnenBiotechnology Center & Division of Extension, Wisconsin 4-H
UW-Madison