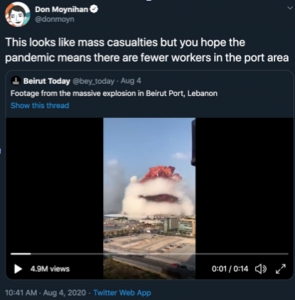 Watching on Twitter yesterday the first video of the explosion & shock wave in Beirut immediately transported me back to July 2016 in Halifax, Nova Scotia, and the Maritime Museum there, and its haunting & harrowing exhibit on the December 1917 explosion of a munitions-laden ship.

The museum told the story of how thousands of Haligonians gathered en famille at their wintry windows watching the ship burn in the harbor; of how the ship’s sudden explosion sent a shock wave that raced across the water and tore into town and blasted shards of window glass into the eyes of hundreds; of how, alas, Halifax became over the decades that followed a leading medical center for treating the blind.

My God, I thought yesterday as I watched the growing stream of videos:  this is the last thing hundreds of Beirut people will see. As in Halifax nearly 103 years ago, some would die instantly;  others would survive yet be blinded by glass from shattered windows through which they were watching the quayside fire.

Overnight came the news that rescue teams, surgical teams and public health teams are among the first to fly into the ravaged city.  As their predecessors in Halifax and other cities have done before them, these teams will likely pioneer new ways to find & bind up the wounded, new techniques to mend and heal the injured, new approaches to stem disease & sustain health.   Their experiences will become stories, will become case studies, will become exhibits, will become history.

Let us remember to remember, so that we may get better and better.

This week I am delighted to place before you three WN@TLs that feature how scholars help us to remember, and how they study the experiences of physicians and folks from a century or a millennium or two ago to gain insights into how humans deal with the catastrophic and the mundane. 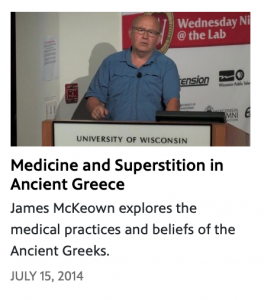 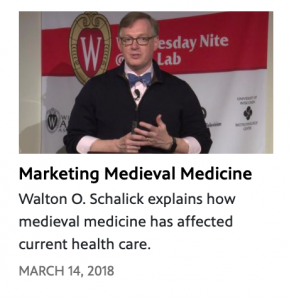 Video can be a transporter that beams us up and takes us back.

When the updates came yesterday that the Beirut explosion likely was from ammonium nitrate, I flashed back to April 19, 1995 and watching on TV the coverage that morning of the bombing of the Murrah Federal Building in Oklahoma City that killed 168.

In another moment I flashed to visions of the two different colors of yellow bricks one still sees mixed today on Sterling Hall and Birge Hall, silent reminders of the ammonium-nitrate-fueled bombing 50 years ago this month on campus that killed Robert Fassnacht and gutted the antiwar movement in Madison.

Let us remember to remember, so that we may become better and better.