Skip to main content
University of Wisconsin–Madison
For February 26, 2020
Please share this invitation with your friends & neighbors.
Hi WN@TL Fans,
Three of my four grandparents were born in 1898. They turned 62 (my current age) in 1960. By then, my maternal grandparents had 7 grandchildren;  my paternals, 16.
Part of growing up, especially as I moved into my teens, involved watching my parents watch their parents and their parents’ friends for hints of slipping in mental sharpness as the older generation progressed through their 7th & 8th decades.
My Mom wasn’t afraid of many things, but she turned ashen at the thought of sliding into dementia in her dotage.  Her fear was fed by having watched Esther Katie, our next-door neighbor and the mother of my mom’s best friend in high school, as Esther Katie’s acuity dulled, her memory faded, her speech slowed and puzzled.
Now I’m at the age and the stage where one hitches at one’s own verbal glitches and one’s own lapses of memory. Are these just a slip, or are they a sign?  I know my kids—now in their teens— won’t have the luxury I had of watching grandparents for hints of senility;  they’ll be watching me.
But I and my kids will have a much sharper view of dementia than one could have in the 1960s.  In the coming years we all will likely benefit from lab tests and advanced imaging that can give us a more reliable tracking—and perhaps slowing—of changes in our mental abilities and, even more vital, of changes in our person.
In my living room is a wingback chair with carved curled handrests. It’s older than I am.  It’s Esther Katie’s favorite chair, from next door at 1718 Third Street in Dixon, the chair she sat in during her prime and in her decline, the chair she sat in when my Mom came through the back door for a visit. It’s still a good place to sit and think, to ponder and to look ahead, and a very good place to remember.
This week (February 26) we welcome Dr. Carol Van Hulle of UW-Madison’s Alzheimer’s Disease Research Institute the for her talk entitled, “What Do We Know & How Early Can We Know It?  Exploring BioMarkers Related to Alzheimer’s Disease. ”
Here’s how she describes her presentation:
“Dementia and dementia due to Alzheimer’s (AD) affects all of us – spouses, children, grandchildren, friends – and has a tremendous public health impact. More than 300,000 people in the state of WI either have or are caring for someone with dementia. At UW, we have over 120 faculty, post-docs, students and staff dedicated to helping to understand the causes and course of dementia due to Alzheimer’s (AD).

“The Wisconsin Registry for Alzheimer’s Prevention and Wisconsin Alzheimer’s Disease Research Center are engaged in a wide range of research that includes tracking early changes in cognitive ability like speech and spatial navigation; identifying genes that impact risk or resilience for dementia; determining how comorbid vascular health impacts vulnerability to dementia; and uncovering the role of lifestyle factors like physical activity in slowing memory loss.

“Much of the research at UW is focused on detecting early signs of AD through proteins measured from the cerebrospinal fluid (CSF) and positron emission tomography (PET) imaging. My talk will go over how we think about dementia due to Alzheimer’s in research settings and how we can use biomarkers to learn about the early stages of AD, before symptoms are apparent. I will also briefly touch on the state of treatment and prevention of dementia due to Alzheimer’s disease.“
More to Explore: 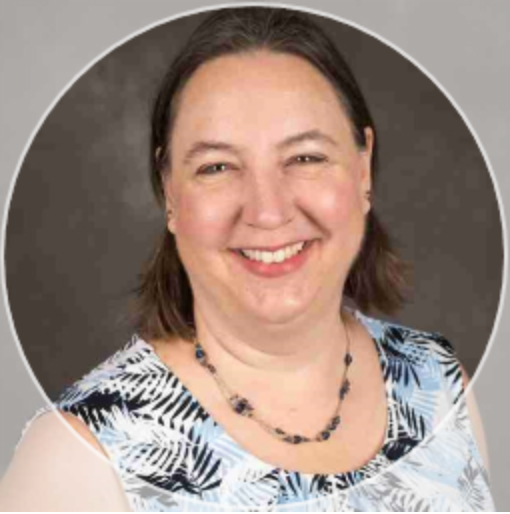 Dr. Carol Van Hulle received her undergraduate degrees in psychology and mathematics from Augsburg College in Minneapolis, MN.  She received her doctorate in psychology with an emphasis in quantitative genetics from the University of Colorado, Boulder.
After several years studying the child temperament and internalizing disorders with the Wisconsin Twin Project she made a late (but not that late) life career change to study Alzheimer’s Disease with an emphasis on cerebrospinal fluid biomarkers for early detection. She resides with her husband, son and two cats.
=== 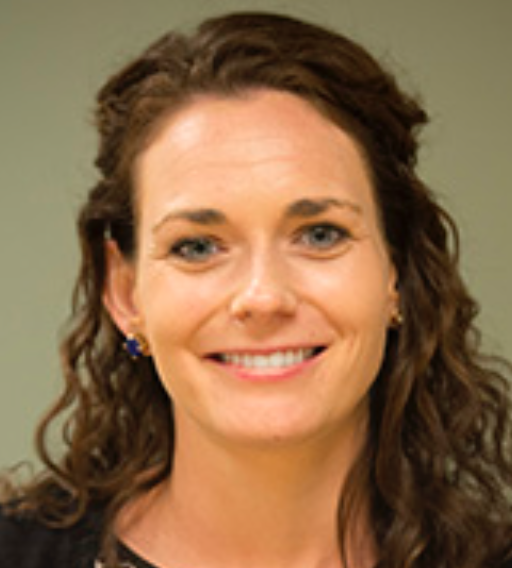 Next week (March 4) we welcome Dr. Katie Schmit for her talk entitled, “Respiratory Viruses of Children & Adults.”  While the new coronavirus has our attention by infecting tens of thousands and killing so far about 3000, regular ol’ seasonal influenza is killing up to 640,000 people worldwide every year.  Find out more about these flu viruses that ebb & flow among us, young and old, here at home and around the globe, every year.
A Special Request: Please mark your calendars for the 18th Annual UW-Madison Science Expeditions campus open house April 3-5.  Three days, 30 venues, and more than 300 scientists welcome you to come explore science at the U.
Hope to see you this week at Wednesday Nite @ The Lab!
Tom ZinnenBiotechnology Center & Division of Extension, Wisconsin 4-H
UW-Madison

Visit UW-Madison’s science outreach portal at science.wisc.edu for information on the people, places & programs on campus that welcome you to come experience science as exploring the unknown, all year round.
Here are the components of the WN@TL User’s Guide:
1. The live WN@TL seminar, every Wednesday night, 50 times a year, at 7pm CT
2. The live web stream at biotech.wisc.edu/webcams
3. The WN@TL YouTube channel
4. WN@TL on the University Place broadcast channel of PBS Wisconsin
5. WN@TL on the University Place website
To invite your friends to subscribe to the WN@TL listserve, ask them to send an email to join-wednesday-nite-at-the-lab@lists.wisc.edu 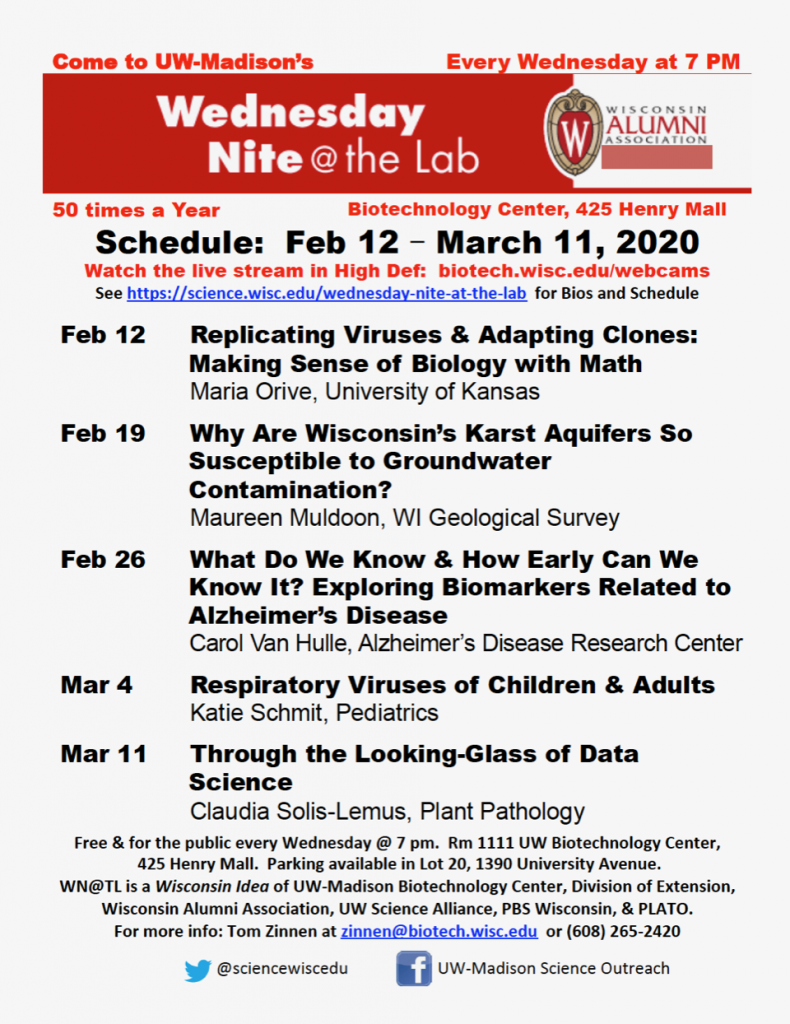