An altar boy who pays attention—and that should be all of them, or else someone will be wringing the wrist bell at the wrong time—can pick up a whiff of the history of heresy by a careful reading of the Creeds.  The Apostles’ Creed in its simplicity contrasts with the Nicene in its sophistication in repudiating heretics.

But a heresiarch such as Arius was within the Christian church. At St. Mary’s I didn’t hear much about other religions that were springing up and spreading out across the Roman world, and with which the early Christian church was competing for eternal souls, earthly survival, and temporal power.  Thus the Mithraic Mysteries  are new to me.

I am intrigued that archeologists can not only piece back together the structures of ancient civilizations but also peer into their belief systems.  With each new layer of modern technology that comes into play—molecular archeology, for example—other layers of insights into the ancients can come into view.

This week (May 29) we have the special treat to welcome Matthew McCarty, Assistant Professor of Roman Archaeology at the University of British Columbia.

The title of his talk is “Between Trench & Lab: Reconstructing the Roman Mystery Religion of Mithras.”

Here’s how he describes it:

How do we reconstruct a “mystery religion” practiced two thousand years ago? Contemporary with the rapid spread of Christianity through the Roman Empire, another “new” religion attracted droves of worshippers from Britain to Syria in the second and third centuries CE: the cult of the Persian god Mithras.

Our modern understanding of Mithraism, though, depends largely on a few short (and very problematic) literary mentions, mostly written by the cult’s Christian rivals.

This talk explore how new archaeological evidence and techniques can paint a much more robust picture of ancient Mithras-worship. You will get to take an archaeological tour of a newly discovered temple to Mithras, located on the edges of the Roman Empire in modern Transylvania, and see how the smallest piece of trash excavated there can shed new light on a religion shrouded in darkness. 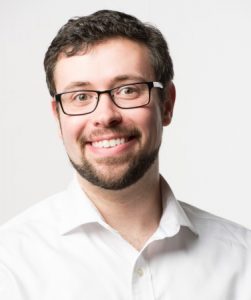 Matthew McCarty is Assistant Professor of Roman Archaeology at the University of British Columbia. His research explores the practice of ancient religion in the context of Roman colonial power, from child sacrifice in Roman Africa (the subject of his forthcoming book) to the worship of the Persian god Mithras.

From 2013 to 2017, he directed the Apulum Mithraeum III Project, an international research excavation of a Roman temple to Mithras in Alba Iulia (Romania).

In 2018, he began a new excavation project funded by the Social Sciences & Humanities Research Council of Canada exploring the processes of incorporation into and disincorporation from the Roman Empire on a rural villa site in Transylvania.

He holds a DPhil from Oxford, and before joining the faculty at UBC, he taught at Yale and Princeton. 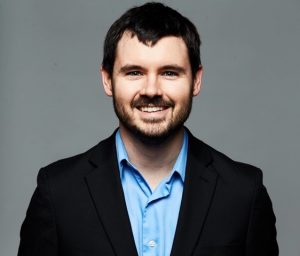 Next week (June 5) Peter Favreau’s research at the Morgridge Institute for Research has focused on personalized medicine and improving treatments for colorectal cancer using biophotonics.

He’s exploring “how light from a patient’s own tumor cells allows us to quickly ascertain the most effective treatment for a patient while minimizing common drug side effects.”