In February 1994 I moved in to 210 Campbell Street, about four blocks south of the UW campus and three blocks north of Henry Vilas Zoo.  It’s next to 216 Campbell Street.  I found out later that 216 Campbell is where Governor Doyle grew up.  It’s the kind of tidbit that comes in handy when one gets introduced to a governor when he comes to make a big announcement at one’s outreach lab.

It happens that 210 Campbell is downhill from 216, so when I looked south out of my kitchen window I looked directly into a casement basement window.  The impact of that view changed when I stumbled on the fact that 216 Campbell had been the home of Michael Olbrich — of Olbrich Gardens fame and an early champion of establishing a University of Wisconsin Arboretum — for it was in that basement that Olbrich hanged himself on October 10, 1929, at age 48.

And yet there was more history and more mystery on Campbell Street than just a governor or a philanthropist. A block and half south was Vilas Circle, as it was then, home of the Bear Mound. The Mound lies subtle on the soil, and there is something sublime about lingering in the evening and into the gloaming at a place so ancient in origin, a place so revered for centuries.

Unlike the Doyles or the Olbrichs of our times, we will never know the names of the people who built the mounds. We are left no written obituaries, no chiseled stele of letters or of glyphs.  But the mounds, inscribed on the land, remind us of those who were here long before us, and they offer some insights into how they lived their lives close by the Four Lakes and all around what is now Wisconsin. 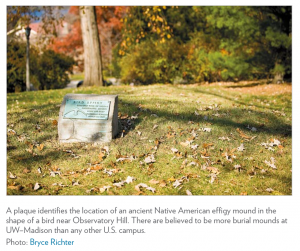 This week (August 1) our speaker is Amy Rosebrough of the Wisconsin Historical Society. Her talk is entitled “Mapping Monumental Mysteries:  Exploring Wisconsin’s Famous Effigy Mounds.”  Here’s how she describes her talk:

“Between AD 750 and 1200, communities across much of Wisconsin and portions of adjoining states created earthen burial mounds in the form of animals and spirits—Wisconsin’s famous ‘effigy’ mounds. Thousands of such monuments were created, transforming southern Wisconsin into what some early settlers described as a sculpted landscape. Effigy mounds were built by nearly two dozen communities, many located where Wisconsin’s major cities and towns stand today.

“Since their discovery by Euro-American settlers, the mounds have fascinated non-Native peoples. In the late 1800s, a number of eccentric individuals competed to document effigy mounds before the land was broken and developed. The sculpted landscape itself now survives only in the records they left behind, and in fragments saved by early preservationists, rugged terrain, and sympathetic landowners. Today, recent changes in Wisconsin’s burial sites protection law have extended increased protection to the surviving mounds. LiDAR technology has greatly enhanced our ability to locate and monitor damage to the last effigy mounds—while simultaneously changing our interpretations of how effigy building may have come to an end.

“Each community seems to have built mounds in its own way, drawing from various artistic and ritual traditions. Though broadly shared enough to comprise a larger Effigy Mound Ceremonial Complex, mound ritual and design varied in discernable ways. Mound form, in particular, reflects the social geography of Wisconsin’s Late Woodland communities, documenting the presence of different social groups in different regions. With the arrival of Middle Mississippian peoples from Cahokia ca. AD 950, some effigy-building communities seem to have retreated and intensified effigy ritual while others quickly abandoned effigy ritual in favor of Cahokian ceremonies and life ways.”

Dr. Amy L. Rosebrough is a native of the Ozark mountains of southern Missouri who developed an interest in archaeology at a young age.  After attending Missouri State University and the University of Arkansas-Fayetteville, she moved to Madison and received her Doctorate from UW-Madison for her research into spatial patterning in effigy mound symbolism and Late Woodland ceramic design.  She currently works as a staff archaeologist in the State Historic Preservation Office of the Wisconsin Historical Society, where she assists landowners, researchers, and archaeological consultants and maintains archaeological components of Wisconsin’s Historic Preservation Database.

===
Next week (August 8) strap on your scutellum for the first in a back-to-back series on Wisconsinsects.  Dan Young of Entomology will be here to guide us through the Insect Research Collection.  He’ll provide insights into the ways collecting, curating & cataloging insect specimens from all over the world helps speed entomology research here at the University of Wisconsin-Madison.
The following week (August 15) PJ Leisch of the Insect Diagnostic Lab returns to WN@TL for a high-summer update on how the insects of Wisconsin, denizens and interlopers alike, are faring in this mild and verdant year.
Hope to see you soon at Wednesday Nite @ The Lab.Tom Zinnen
Biotechnology Center & Cooperative Extension
UW-Madison