It is High Summer.  We drive through betasseled corn canyons and past wheat fields ready for the combine or spotted with golden bales worthy of Rumpelstiltskin.  The alfalfa is busy working up the next cutting.  Our cups runneth over in bucolic gemutlichkeit.  It could be a good time to consult with Google on the difference between “languid” and “lethargic,” except such a search would be too much work.

Since it’s done at least twice if not thrice a day, it’s understandable why for a century or more researchers have been inventing & honing ways to take the drudge, the dirt and the hurt out of milking.

It’s a process that also affects the quality of the milk by reducing contamination, by rapidly cooling the milk, and by enabling timely shipping. It’s also a key point in collecting daily data on the feeding, physiology and production of each cow.

Milking can also be a bottleneck that strains & constrains the capacity of the land, of the herd, of the farm workers, and of the family. If ever there were a place to laud working smarter rather than just working harder, that place would be the parlor.

This week (July 18)  Doug Reinemann of Biological Systems Engineering rolls out for us the strides made at the udder end of the cow.  His talk is entitled “Milking Machines:  The First 100 Years, from Buckets to Robots.” Here’s how he describes his talk: 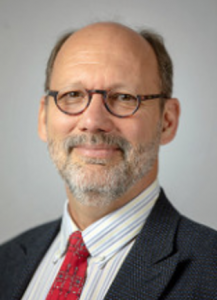 Douglas J. Reinemann is professor of Biological Systems Engineering at the University of Wisconsin-Madison where he has been on the faculty since 1990. He served as Chairman of the Department from 2013 to 2017 and was appointed Associate Dean for Extension and Outreach in the College of Agricultural and Life Sciences in 2018.

Doug has been working at the interface between energy and agricultural systems for the past 20+years. His studies have included energy use and energy production in agricultural systems. He is a member of the sustainability group of the UW Great Lakes Bioenergy Research Center examining environmental impacts of biofuels production systems. He also leads the UW ‘green cheese’ team who are investigating synergies between dairy and biofuels production systems in Wisconsin. Doug has been actively involved with the Midwest Rural Energy Council – an organization of power suppliers addressing issues related to energy supply to agricultural production and processing operations as well as integrating renewable energy resources into the energy distribution grid.

Dr. Reinemann has directed the activities of the UW Milking Research and Instruction lab since 1990. He is the US representative and Chair of the International Dairy Federation’s working group on machine milking, and is the US representative to the International Standards Organization committees on milking machine performance and installation and Automatic Milking Installations. He has chaired the machine milking committees of the ASABE and the NMC.

Next week (July 25) Josh Hyman of the Biotech Center updates us on the latest machines for sequencing DNA, including the new one at the Biotech Center that when fully up & running will be able to crank out a trillion bases a day.

Sometimes, speed changes just about everything.