Skip to main content
University of Wisconsin–Madison
For June 20, 2018

As I mentioned two weeks ago, the story of my hometown is driven in no small part by the changing tides of energy production.  Dixon was founded in 1828 as a ferry across the Rock River on the wagon road between Peoria on the Illinois River and Galena on the Apple River.  A few decades later, a wing dam and then a full dam harnessed the Rock’s current to drive mills—including a flour mill and a wood-planing mill.

The hydro plant lingers, the coal plant is gone—replaced by a nuclear plant upstream at Byron, IL— and two natural-gas-fueled power plants sit on the prairies, one four miles east of town in Nachusa, the other four miles west in Nelson.

But the next tide of power might not surge solely from large electric plants upon broad prairies or along river banks.  The next tide might rest on our roofs, in photovoltaic panels soaking up the sun, turning photons into electrons, harnessing a current to drive our coffee mills and compressors and computers and perhaps our cars.

The new tide of power production is also accompanied by a new expectation of tracking our use of electricity in real time, at each outlet, by each device—for knowledge truly is power, especially in the home topped with solar panels

This week’s talk (June 20) by Bruce Johnson is entitled “Living Solar in the Suburbs:  10 Years On.”  Here’s how he describes his talk:

“Bruce Johnson has been a self-described “solar farmer” for 10 years. He has told his story in two previous Wednesday Nite @ the Lab lectures (March 18, 2015; September 5, 2012), and now with a decade of experience under his belt, he takes a look at the history, the progress, and the future of renewable energy at a personal level.” 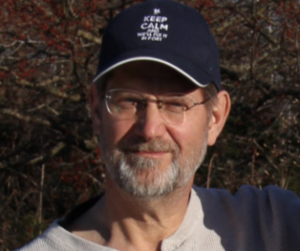 Bruce Johnson is a broadcasting professional with more than 35 years of experience. He recently retired from Wisconsin Public Television after 30 years, and he is now the director of production for the Freedom From Religion Foundation. Johnson’s experience in solar power goes back to 2008: he has owned and operated two solar photovoltaic systems, one solar hot water system, and three electric cars. He lives on the east side of Madison with his wife and two daughters. 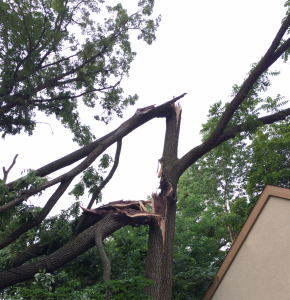 The storm that blew through Madison on Friday night snapped three main limbs from the crown of the walnut in my back yard.  That was the unhappy news.

The happy news is that I’ll have to cut down the shattered carcass of the tree, and that will free up my garage roof to be prime space for solar panels.  As John Denver almost sang:  Sunshine on my panels makes me happy.

Ah, summer evenings:  because June 20 is the Wednesday closest to the summer solstice, after Bruce’s talk we’ll head to the Terrace for beers and cheers and a sunset over Picnic Point.

Next week (June 27), a juxtaposition.  This week we get to learn about solar power for electricity.  Next week we get to explore how the sun energizes the most powerful storms on the planet.  Whether you call’em hurricanes or cyclones, these massive atmospheric maelstroms are renowned for getting our attention, changing our landscapes, and rocking our political worlds.  Derrick Herndon from the Cooperative Institute for Meteorological Satellite Studies shares new insights into hurricanes.

Also, please note that Matt Goins of DOIT and Liz Jesse of BioTrek have launched the new WN@TL website at https://science.wisc.edu/wednesday-nite-at-the-lab/

The Wisconsin Alumni Association will be retiring the old site as of July 1.