Wow.  Valentine’s Day and Ash Wednesday on the same day.  Celebrating the carnal on the day after Carnival. Sometimes even the most familiar stuff can surprise you.

And what can be more familiar than meiosis, our reduction-division friend we all met back in high school biology? Metaphase I, Crossing Over, Anaphase II:  sounds like something from the Pharaohs of the Nile.

But meiosis is deceptively varied:  vital to making gametes for human reproduction,  central to plant propagation where it yields spores (rather than gametes), yet even single-celled yeasts can get into the act of cranking the genetic recombination slot machine.

This week (February 14) we mark Darwin Days with a special presentation entitled “Sex, Cells, Evolution: The Molecular Origins of Meiosis & Its Sometimes Strange Natural History” by John Logsdon of the University of Iowa.

In this talk, Logsdon will discuss ongoing research that illuminates the molecular natural history of sex and meiosis. His lab studies diverse biological systems that appear, in various ways, to be exceptions to many “rules” in sexual biology. Using data gathered from studies of these various organisms, Logsdon and his fellow researchers ask and attempt to answer questions such as, when did sex and meiosis arise? How and from what prior function(s) did sex and meiosis derive? How has sex subsequently evolved? Can sex and meiosis be lost?

Logsdon earned his bachelor’s degree from Iowa State University and his doctoral degree from Indiana University. He conducted postdoctoral research at Dalhousie University in Halifax, Nova Scotia, and was an assistant professor of biology at Emory University until 2003, when he moved to the University of Iowa. Research in the Logsdon lab seeks to describe and understand the molecular natural history of sexual reproduction, focusing specifically on meiosis: the special cell division that allows for sex to proceed.

If you’re a bacterium, you don’t have a nucleus, which means you don’t undergo meiosis, but that doesn’t necessarily keep you from having sex.  Some seven decades ago Joshua Lederberg and his wife Esther Lederberg were discovering sex in bacteria in a basement lab in the old Genetics building on Henry Mall.

On Monday, Millard Susman, professor emeritus of genetics, gave a splendid talk on the Lederbergs’ work here at the Biotech Center. You can watch the talk here: https://www.youtube.com/watch?v=DUZjWZ0l1Q0.  Happy Valentine’s Day.

Next week Mutlu Ozdogan of Forest & Wildlife Ecology will give us his global perspectives on how to map the world’s croplands.

He’ll show us how he & his colleagues are redefining the ways we chart our amber waves of grain. 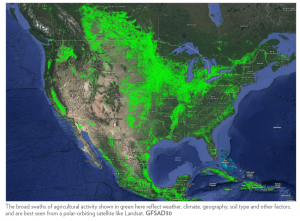