UW-Madison Science Alliance Updater
21 June 2021
Hi Everyone,
Yesterday was the solstice, the day when the sun stands still in its progression northward in the sky, and starts back southward on its long slide to December.  For people at the Terrace, had the clouds not got in the way, they’d have watched the sun set over the middle of Picnic Point, which serves as a kind of Analemma of the Lake.
While we all agree that the solstice was yesterday, definitions of “summer” evade and elide easy delineation.  The astronomers say the first day was yesterday—while that’s precise, it’s also silly if one considers that the latest rendition of Shakespeare’s “A Midsummer Night’s Dream” was last night.
The meteorologists go with June 1 as the first day of summer, and that also fits the school year pretty closely, at least it did when I was a kid, when school pretty much ran from Labor Day to Memorial Day.
Yet year by year I find myself growing more in favor of the traditional pagan/European approach:  summer begins on May Day, the solstice is MidSummer, and August is High Summer.  Fall can begin with the autumnal equinox around September 21.  That gives us nearly four and 2/3rds months of summer.  That’s about right.
While we define summer in many ways, in many ways summer also defines us and our work in science outreach, and especially this year, as we re-open some angles of science outreach while keeping others closed.  Let us see what this summer brings, and what we bring to it.
+++
Speaking of the Terrace:  Our next meeting is today, Monday June 21 at 10am CT.  It’ll be a hybrid format, by Webex and in person at the Terrace.  I hope to see many of you then.
Thanks again!
Tom Zinnen
Note: please visit https://science.wisc.edu/science-alliance/ for the Updater archive.
Notable This Week
1.  During the summer, Science Alliance meets occasionally by Webex at 10:00 am Mondays, including June 21 but not June 14. Email Liz Jesse at ejesse2@wisc.edu or Tom Zinnen at zinnen@biotech.wisc.edu to receive the link. The meeting notes are archived on https://science.wisc.edu/science-alliance/.
The meeting for June 21 is hybrid: online using the Webex link, or in person at the Terrace for those who can join us there.  The draft agenda includes:
2.  Now in Archive:   Please invite your colleagues in research & outreach to check out the YouTube archives of presentations from  2021 UW Science Expeditions Open House on April 9, 10 and 11.
3.  Programming Events coming this week and soon:

June 23  “The Aurora, from Above & Below”  Margaret Mooney, NOAA’s Cooperative Institute for Meteorological Satellite Studies; and Dixie Burbank, Dixie J. Digital
June 30  “Adjusting to a Changing Great-Lakes Coast”  Adam Bechle, Wisconsin Sea Grant
July 7  “New Recycling Technologies to Combat Plastic Pollution”  Reid Van Lehn, Chemical and Biological Engineering
July 14 “Assessing Atherosclerosis with Ultrasound: A Quantitative Approach”  Catherine Steffel, Departments of Medical Physics and of Biochemistry
5.  Come and observe the cosmos with Edgewood’s Astronomy Outreach Team at Ernest Hüpeden’s Painted Forest in Valton, WI. We will have guest speakers, activities for kids, and observe the night sky through the 20” Dobsonian Telescope. (Observing will be weather permitting.) To keep up to date with any changes due to weather conditions, and get reminders for the star parties, visit and like our Facebook Page @edgewoodastro

6.  Due June 30:  Wonders of Physics for 2021
After 37 years of physics presentations to the public, The University of Wisconsin – Madison is this year sponsoring a physics video competition for teachers and students.

We invite you to submit a 2-minute video demonstrating a physics concept. Awards will be given for the best videos, and winners will be posted on our website and edited into a longer video to be shown on public television.

We encourage submissions from students and teams, but for legal reasons, anyone under the age of 18 must work under the supervision of a parent, guardian, or teacher who will submit the video on their behalf. This could be a fun educational project for families or for physics classes during this period of social distancing.

The deadline for submissions is June 30, 2021. You can find more information at https://wonders.physics.wisc.edu/contest/.

Aerospace Jam is a competition for high school students across Wisconsin to use drones on a NASA-inspired simulated moon mission. The program is a partnership between the NASA Wisconsin Space Grant Consortium and the Milwaukee Bucks. Our goal is to recruit students from diverse backgrounds and cultivate a welcoming and inclusive event that will foster meaningful interactions among teammates and teams.  See the flyer attached for more information.

Applications to compete in the Aerospace Jam event are now open through August 2. The event is open to all public and private high schools in Wisconsin.  To learn more, visit: https://www.carrollu.edu/aerospacejam and http://wsst.wildapricot.org/resources/AerospaceJam_SaveTheDate.pdf
10.   Interim Director of Science Outreach at Edgewood College

I will be taking on an Interim Dean role next year and am looking for a half-time person to hold down the fort in Outreach.  I have two Program coordinators that will keep the major programs up and running but are looking for someone to oversee things and keep us afloat.  There is also a half-time teaching opening that someone could couple with this if they want full-time and are qualified.  We are in a hurry to get this position filled as I start July 1 and we would like some transition time.  If you know of anyone (Ph.D preferred but MS is OK) please direct them to our page and to get materials in ASAP. 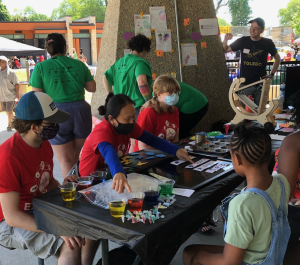 Thanks to Ana Garic who collaborated with Dr. Roderquita Moore to organize the participation of nine Exploration Stations at the Juneteenth Celebration on June 19 at Penn Park. Programs represented included SciPOP of the School of Medicine & Public Health, the School of Nursing, the School of Veterinary Medicine, the Wisconsin Geological & Natural History Survey, Tiny Earth of the the Wisconsin Institute of Discovery, the Department of Neuroscience, the Biotech Center & Wisconsin 4-H, and Astronomy; plus Discovery Outreach and the Wisconsin Science Museum.
Watch for Juneteenth celebrations next year on Saturday June 18 and Sunday June 19, 2022.