Skip to main content
University of Wisconsin–Madison
For November 20, 2019
Hi WN@TL Fans,
If you go to Niagara Falls on the American Side, you’ll have a chance to see the Rather Large Statue of Nikola Tesla depicted as seated and scanning blueprints of what the folks in New York claim to be the first large-scale hydro-electric power plant in the world. 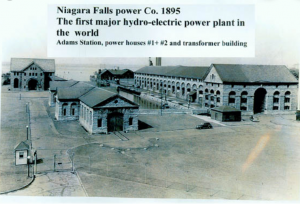 This New Yorkish claim triggered bitterness in me the first time I saw it because I remembered reading a plaque in Appleton, Wisconsin, about the first hydro-electric plant in North America, which had been installed on the Fox River by Thomas Edison.  In 1882.
Stupid New Yorkers, always claiming bragging rights for coming in second. 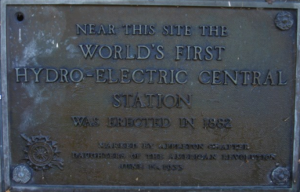 (The Appleton WI plaque)
Come to find out, other hydroelectric plants were built at Niagara—also as early as 1882.  But these small pioneers also get no shrift at the Tesla memorial. This is why it’s always such rapture to argue over primacy.
Tesla and Edison continue to symbolize competing views of the electric avenue to invention, enlightenment and prosperity.  Edison was a native, an empiricist, and a proponent of direct current who snarled at theory and left his name in huge corporations, including Consolidated Edison in New York and Commonwealth Edison in northern Illinois.  Tesla was an immigrant, a theoretician as well as an experimentalist, and the inventor & proponent of alternating current who died penniless & in obscurity, and who left his name on no major enterprises.
It’s worth noting, however, that Tesla’s chops as a scientist have been enshrined in the tesla unit of magnetic flux in the International System. In contrast, there is no SI edison unit, although Dick Van Dyke’s whistle-tooting dog in Chitty Chitty Bang Bang was named for the Wizard of Menlo Park.
The push & pull of competing technologies for the generation, transmission, storage, and use of electrical power may have yet another page to turn.
This week (November 20)  Daniel Ludois of Electrical & Computer Engineering reports on his research into electric machines—motors and generators—which for a century have been the cornerstone of our modern way of life.
This talk will touch on three subjects:
1) The physical operating principles of machines and how magnetic forces evolved from Faraday’s Cup to the industrialized world;
2) How modern applications such as wind turbines and mobile robotics pose serious challenges to magnetic machine technology; and
3) How his research group is leveraging electrostatic (rather than electromagnetic) forces to meet these modern application challenges.
About the Speaker 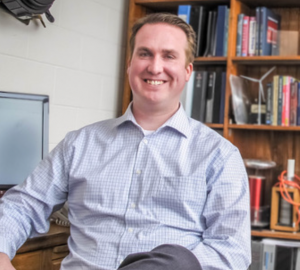 Daniel Ludois received his Ph.D. in electrical engineering from the University of Wisconsin–Madison in 2012 and B.S. in Physics from Bradley University in 2006. Dr. Ludois currently serves as an associate professor of electrical and computer engineering in UW–Madison’s College of Engineering, associate director of the internationally renowned Wisconsin Electric Machines and Power Electronics Consortium (WEMPEC), and is an affiliate of the Wisconsin Energy Institute.
Prof Ludois’s interests are focused on the use of electric fields in power conversion devices such as motors, generators and wireless power transfer. He is also cofounder and chief science officer of C-Motive Technologies, a start-up business dedicated to producing innovative, energy and cost-efficient electrostatic motors.  Ludois received the NSF CAREER Award in 2015, was named Midwest Energy News 40 under 40 in 2016, and a Moore Inventor Fellow in 2017.
====
Next week (November 27) WN@TL goes dark for the Wednesday before Thanksgiving.   As we are entering the week of gratitude, I note that tomorrow, November 20, is the 65th anniversary of my parents’ wedding.  I am grateful they went through with it; it allowed me to choose my parents well.
I have distinct memories of celebrating their 25th anniversary at the KC Hall in Dixon.  They seemed so old, at 51 and 54.  I have since revised my assessment.
====
In two weeks we will be into December, the 4th to be exact, and Prof Natalie Schmitz of the School of Pharmacy will be here to talk about the rage of 2019:  cannabinoids, among the key active components of CBD oil.
Hope to see you this week at Wednesday Nite @ The Lab!
Tom ZinnenBiotechnology Center & Division of Extension
UW-Madison