Skip to main content
University of Wisconsin–Madison
For August 15, 2018

Right after  last week’s WN@TL by Dan Young on the Wisconsin Insect Research Collection, I drove over to Monona to visit my friend Ken Smith on the occasion of this 70th birthday.  While sitting around the kitchen table, his wife Roberta asked me if I knew much about hummingbirds, and showed me on her phone a photo of a hummingbird with gold stripes visiting her flower garden.

I can’t hardly tell a grackle from a gecko, but I noticed the bird had two black antennas sticking out its head.  Turns out it’s likely a hummingbird moth. What appeared to be its birdly beak and tongue was actually an insectly proboscis for probing and getting to the nectar of the flowers.

Insects add surprise, color and delights to our days and to our nights.  The crickets and locusts sound out the cadence of August. Lightning bugs twinkle as do the stars, but only the bugs can fit in our jars.

But not all is swell with the critters.  Mosquitoes are among the deadliest animals known to humanity, and some of those that don’t kill you will annoy you to death.

So people want to know:  What’s this louse in my house?  Which lice are on my mice?  What’s chewing my crops and threatening my livestock? And is that arachnid akin to Charlotte, or is that the kind of spider that you ought not sit down beside her?

And that’s why we have diagnostic entomologists who track the ebb & flow of insects as they come and go over the seasons all around Wisconsin.

This week (August 15) our speaker for the second in our back-to-back series on insects is PJ Liesch of Entomology & Cooperative Extension.  He is director of the UW-Madison Insect Diagnostic Lab.  PJ will provide a high-summer update on how the insects of Wisconsin, denizens and interlopers alike, are faring in this mild and verdant year.

Here’s how PJ describes his talk, “The Buzz Report:  The Year So Far in Wisconsin Insects.”

“With over 20,000 insect species in the state, there’s never a dull moment in the arthropod world.  Tune in to see what’s trending this year in Wisconsin’s insects—from hordes of army worms to plagues of mosquitoes and new invasive insects.”

Patrick (PJ) Liesch holds degrees in biological sciences (B.S., UW-Parkside, 2007) and entomology (M.S., UW-Madison, 2010), and has been the director of the UW-Madison Insect Diagnostic Lab since March of 2014.  PJ has been involved with insect-related research, outreach and Extension since 2005, and has been catching insects and other biological curiosities since childhood.  He is a regular speaker for the Wisconsin Master Gardener program, the Wisconsin First Detector Network, and the UW Farm and Industry Short Course programs.  In addition, PJ is a regular guest on Wisconsin Public Radio’s Larry Meiller Show.  PJ can also be found Tweeting about life as an entomologist: @WiBugGuy. 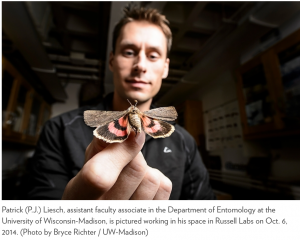 • UW Insect Diagnostic Lab website: labs.russell.wisc.edu/insectlab/
• UW Insect ID website: labs.russell.wisc.edu/insectid/
• Twitter: twitter.com/WiBugGuy
===
Insects can also bring us serendipity:  it turns out that the hummingbird moth is similar to the moth PJ is holding in the photo.
Next week (August 22) Grace Graham from the Wisconsin Geological Survey and Sue Swanson from Beloit College will chart out for us their project in mapping all the springs of Wisconsin.  Come explore where our hydrologic cup runneth over.
Also, in response to questions last week, Dan Young asked me to share these links with you.  They’re germane to this week’s talk, too.
“Windshield Phenomenon”
http://www.sciencemag.org/news/2017/05/where-have-all-insects-goneBug Guide:  http://www.sciencemag.org/news/2017/05/where-have-all-insects-goneNew Tick Application:  https://news.wisc.edu/wisconsin-researchers-release-new-app-to-study-what-makes-ticks-tick/
===
By way of coming full circle, my friend Ken Smith pioneered the concept of making the UW-Madison campus a “Destination for Exploration.”  He advocated for the U to be intentional in welcoming the public to come visit here, every day, to experience science as exploring the unknown.  From this aspiration to intentionality I took some inspiration in helping to start a public science series that would be regularly scheduled, reliably provided, and routinely held at one place.
It’s called Wednesday Nite @ The Lab.
Thanks!
Tom Zinnen
Biotechnology Center & Cooperative Extension
UW-Madison