WN@TL:”Networks: the Science of Interconnected Systems”

In the past fifty years, scientists in a wide range of disciplines have come to recognize the importance of networks in describing a wide range of systems in our world, and the field of network science has emerged to provide the tools necessary to investigate the properties of these systems. In this talk, I will give an overview of this exciting and still (comparatively) new field and discuss some of the exciting work in this area currently happening here at UW-Madison. We will begin with a whirlwind tour of some basic discoveries in network science to date, including the “six degrees of separation” phenomenon (made famous by the game “six degrees of Kevin Bacon”). Finally, we will discuss some of the work done by my group and by some of my colleagues here at UW-Madison developing statistical methods for rigorously describing and comparing the basic properties of networks.

Bio: Keith Levin grew up outside of Boston, Massachusetts and attended Northeastern University, where he earned degrees in linguistics and psychology. He worked as a data analyst at BBN Technologies before returning to academia to obtain his Ph.D. in Computer Science at Johns Hopkins University. Prior to joining the faculty at UW-Madison, he was a postdoctoral research fellow in the Department of Statistics at University of Michigan. In his spare time, Keith enjoys cooking, hiking and playing jazz bass. 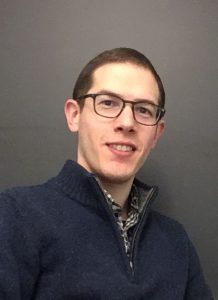