WN@tL: “What’s a Portrait Doing on this Map? Reinterpreting Captain John Smith and His Map of New England”

After his exploits in Virginia (think: Pocahontas), Captain John Smith sailed briefly to “northern Virginia” in 1614. His voyage led him to think about a new colonial endeavor to what he now called New England. Few early maps are as burdened with myths and misconceptions as the map he then made of the region. Almost every aspect of the map has been misunderstood. This liberally illustrated lecture blends art history with marine exploration with cartography. It starts with the question of why the map bears a portrait of Smith — when no other maps of the period bear likenesses of their makers — to reveal how the map is less a precise record of Smith’s 1614 voyage and more a complex portrait of a man, a region, and a colonial ideal.

Matthew Edney is a geographer, map historian, and UW alum (MS 1985, PhD 1990). Since 2005 he has directed the History of Cartography Project at UW, up in the warrens of Science Hall (geography.wisc.edu/histcart/). The Project prepares the award-winning series, The History of Cartography, a comprehensive history of the science, technology, and sociocultural ramifications of maps and mapmaking, across human cultures and all times. The series comprises six volumes in twelve books. Volume One appeared in 1987, covering prehistoric, ancient, and medieval mapping; four of the five published volumes are online for free access (www.press.uchicago.edu/books/HOC/) and their chapters have been downloaded more than 3.7 million times. Edney edited Volume Four (Cartography in the European Enlightenment) with Mary Pedley; the volume appeared in print just after the start of the pandemic but is available! Only Volume Five (Cartography in the Nineteenth Century) is left! The series has been a major force in reconceptualizing the nature and history of maps and mapping and in popularizing the study of map history across the humanities and social sciences. Edney is also Osher Professor in the History of Cartography at the University of Southern Maine, Portland. He is broadly interested in the technologies, practices, and institutional contexts of surveying and mapping in Europe after 1600. His latest book is Cartography: The Ideal and Its History (Chicago, 2019). Edney also maintains an academic blog at www.mappingasprocess.net and tweets @mhedney 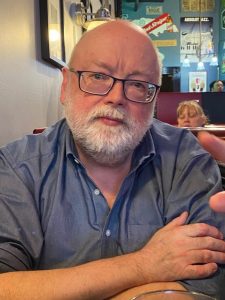